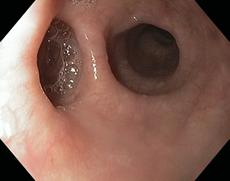 They are saccular dilatations of hollow viscera, which in this case is the esophagus. It can occur in the upper, middle, or lower tract of the esophagus. The most common is the diverticula of the upper third or Zenker’s. They are usually caused by a failure in the posterior wall of the pharynx, so that dilatation occurs.

Symptomatology:
• Regurgitation of previously swallowed content.
• Dysphagia may also be produced by extrinsic compression of the esophagus itself.